You are here: Home / Archives for VIDEO 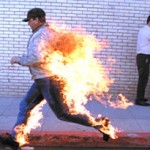 World’s Biggest Music Video Retrospective Coming To Australia At the beginning of its broadcast in 1981, music channel MTV began using the tagline “you’ll never look at music the same way again,” and they were right. Fast forward to the modern day and the humble music video has become an art form in and of itself. Now for the first time in Australia, the world’s leading … END_OF_DOCUMENT_TOKEN_TO_BE_REPLACED

Indian death video emailed by Australian police: report MELBOURNE, Saturday 9 October 2010 (AFP) - Australian police circulated an Internet video of an Indian man being electrocuted on top of a train and joked that it "might be a way to fix the Indian student problem", a report said Saturday. Read more on Sin Chew Jit Poh … END_OF_DOCUMENT_TOKEN_TO_BE_REPLACED